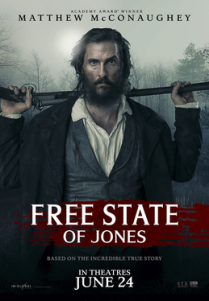 I was going to make this a full review… Then I realized that there was almost nothing to talk about with this movie and thought, “Why should I bother?” The Free State of Jones is a movie that was released early in the summer and was meant to be a more conservative summer blockbuster. Sure Independence Day: Resurgence and Suicide Squad are out there, but also here is a unique story about the Civil War based on a fascinating book written by Sally Jenkins. While the movie itself isn’t the worst thing that I have ever seen, the source material did not fit a summer blockbuster movie and as a result gets labeled with two words that kill a movie: boring and forgettable.

After the Battle of Corinth, Confederate soldier Newton Knight (Matthew McConaughey) deserts the army and makes his way back home to Jones County Mississippi. Becoming increasingly disenfranchised with the confederate army after the death of thousands mixed with the fact that the Confederacy is now taking food and land away from the people for the war effort, Knight begins to rally people to his side as more and more soldiers begin to leave the army and head home. Knight and Jones County then secede from the Confederacy and become the Free State of Jones.

This movie… Sure does exist. Overall, there is nothing here that is offensive or terrible. The pacing is bad, but isn’t egregiously bad. It can certainly hold your attention for some time, especially if you are into the source material.

However, the racial subtext that drives the movie is completely buried by the fact that it focuses on a bunch of white people and ultimately there is nothing here that can even make the movie worth watching a second time. This one is certainly a pass and at least in contention for the dishonorable mention at the end of the year.

Thank you for reading and as always, if you liked this review please like and subscribe for more.