It is that time of the year again! Time to review one of the Big four of the WWE, Survivor Series. This show was… relatively successful. There was certainly some surprises to say the least and overall I walked away from the show feeling satisfied with how things worked out. It certainly wasn’t a perfect show, but the new RAW vs. SmackDown Survivor Series motif certainly played to the PPV’s strength and set it apart from the other members of the Big Four. So as always, I will review each of the matches on the Preshow and on the main show then give an overall opinion on the show itself. Also, due to them being on the pre-show, those matches will receive less attention and will have less of an impact on the overall show.

Okay, it is a problem that the Cruiserweight division has devolved into the main Cruiserweight title story line and then a variety of six man tag matches so the other guys can get some WWE-hampered offense in. It is so sad to see a potentially wonderful Cruiserweight division be tarnished by some of the most uniteresting wrestlers from the CWC tournament… Except Rich Swann and Noam Dar. Overall, the match wasn’t terrible and it was saved by the power and charisma of Rich Swann. But beyond that, it isn’t much to write home about.

This match was also eh. It was a standard big man match with some high flying flair thrown in. It did keep the Kane vs. Wyatt Family feud going and overall, it was decent, a little slow, but overall okay.

This was an excellent match to set the pace for the main show. Personally, I loved the idea of the RAW vs. SmackDown Women’s division, Tag Team division, and Upper card division matches. It showcased the strength of each division and showcased the true talent that each division has to offer. For those who are complaining that the Women’s division has been damaged by the brand split? Watch this match and eat your words.

All ten of these wrestlers looked like fucking stars! Even the “weak links,” if that is what you can call them, Alicia Fox and Carmella looked like power house title contenders. The match helped build feuds in Charlotte and Bayley as well as Lynch and Bliss and Carmella and Bella. It was easily one of the best matches on the card.

This actually surprised me. I was expecting The Miz to hot potato the belt over to Sami Zayn and by extension, RAW, so that Reigns and Owens could unify the Universal and United States belt and the Cruiserweights can go to SmackDown. Especially since 205 Live is about to go onto the WWE Network which happens immediately following SmackDown. But I was wrong and while I have some trouble with the other result… This one I was quite satisfied with. Angered, but in the good “OOOO that evil heel” type of angered.

Zayn and Miz had an excellent match with some great offense on each side. Just as you would expect two great wrestlers would. There was a standard Maryse interference ending with Miz’s better half preemptively ringing the bell to give a Dusty-esque finish before Miz got the quick roll up pin. It made Sami look strong, Miz comes across as an evil heel that I was angry won in all the right ways, and the IC belt stays on SmackDown. Normalcy is maintained.

I think I was the only person who was looking forward to this match. The general consensus that I saw was that this match was going to be a “Too Many Dudes” shit show. But these guys proved the critics wrong and put on a stellar contest that proved the strength of the Tag Team division in the WWE right now. Luckily, thanks to the brand split, all of these new tag teams have been able to get plenty of time on screen.

There were legit surprises with the New Day being eliminated early, The Shining Stars surprisingly doing well, Slater & Rhyno stealing the show, and the sole team survivors was the team that is on the rise in the RAW division, Sheamus & Cesaro.

This one chapped my ass, though I have to admit that I had to expect it. I will always love the Cruiserweights. It is what got me into wrestling in the 90’s and I will always value them over the big dudes in the main event. But I knew once Vince McMahon got his hands on Cruiserweights, he would kill it and he is. He brings on two of the most uninteresting guys in Tony Nese and Drew Gulak to the main roster because they are more generic then the rest of the competitors. Guys who wrestled in the WWE before or related to those who have… And then they also brought on Rich Swann who is currently the saving grace. Jack Gallagher? Gran Metalik? Kota Ibushi? Nah, they aren’t what people want. What people WANT is generic white dude. But mini-rant needs to end.

The point I’m trying to make is that it is a mistake to put the cruiserweights on WWE’s flagship show, the one that Vinnie Mac has the most hand in making. SmackDown he gives a little more creative control and they could be great on the standard RAW alternative. But instead they are staying on RAW where they will languish and hopefully find new life on 205 Live.

The match itself was okay. Kalisto and Kendrick had decent chemistry and had a solid match. The ending was, of course, fucky to protect Kalisto, continue the feud with Baron Corbin, and keep Kendrick’s title reign alive. Hopefully they will be able to generate some excitement on 205 Live. We will see, but for Survivor Series? It was an after thought.

Now this match may damn well have been the match of the night. The true main event for anyone keeping score at home, the traditional 5 v. 5 Survivor Series match certainly did not disappoint. There was intrigue, there was the extension of feuds, a multitude of ways to eliminate competitors. The match had it all.

The two big talking points out of the whole thing came from the fact that The Shield had a brief reunion when Reigns, Ambrose, and Rollins triple power bombed AJ Styles through the Spanish announce table. Also… I do love the fact that the ref was screaming at them to not put anyone through the German announce table, but the Spanish announce table is fair game. I guess that strong German engineering makes it indestructible. Either way, The Shield making a come back was a genuinely awesome moment. The other major moment was the fact that Bray Wyatt and his team of Randy Orton and Luke Harper (not in the match) stood tall at the end, building up the faction for once. Oh yeah! And also Kevin Owens attacked someone with Chris Jericho’s list, putting their potential loving friendship in jeopardy. From start to finish, one of the best Survivor Series matches in recent years. 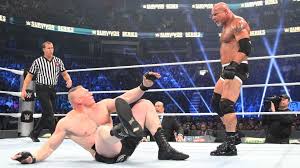 To top it all off, we have to have the Brock Lesnar vs. Goldberg rematch! First off that match sucked to begin with and second of you wasted hours of my life on RAW building up this damn thing. Having Goldberg come out, having Lesnar coming out, having Heyman come out. You spent weeks on this “fantasy warfare becomes real” and wastes our time when you could be focusing on the real main event, the RAW vs. SmackDown 5 v. 5. But no, WWE wasted my time and everyone else’s time to end the match in 90 seconds. Yes, it was surprising! But not in the good way. There was a “I wasn’t expecting that” moment and then a “well at least this shit was quick.” The match ended on a down… But at least it was a quick down.

Thank you for reading and please like and subscribe for more. Please come back in January for the review of Royal Rumble.