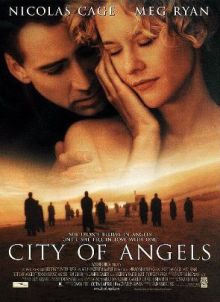 How in the hell did this movie stay so far off of my radar? Seriously! This thing screams cheesy romance. It has the perfect blend of Meg Ryan, random male star du jour, and a silly plot based on a contrived premise. Why did it take me, neigh, three years to actually tackle this thing? Well, I guess since this month is dedicated to typically cheerful comedies, City of Angels tends to sometimes get passed over. This thing has been a long time coming so let’s tear into this piece of shit!

In its most base form, City of Angels is the story of Nicolas Cage’s character, Seth. He is an angel that wants to denounce his angelic ways in order to have sex with Meg Ryan’s character, Dr. Maggie Rice. That is really about it. I mean, sure, the movie likes to pretend that it has some overarching plot about the frailty of life and the acceptance of death, but in truth, this is just a movie about an angel giving up his wings in order to get a little action before his love interest is killed by the plot contrivance truck.

… It Gave Us “Iris” By the Goo Goo Dolls

A Shitty Remake with a Shallow Premise

City of Angles is actually a remake of a german movie known as Der Himmel uber Berlin or The Heaven Over Berlin OR by its shitty English title, Wings of Desire. While the movie certainly strays far into the realms of art house cinema, it is by far a WAY better sit then City of Angels. At least in the original, you have genuine discussions of what it means to be an angel and what it means to be a person. City of Angels, the only thing that the movie really puts any effort into is “sex is so great, I’m willing to drop out of heaven just to bump uglies.” It is painstakingly shallow in its endeavors and, as such, is going to be lost to the sands of time.

I do like Cage. The guy always gives 100% and in a strange sort of way, he can be seriously charming. But this role was not made for him. He had the star power and was hired on those grounds, but man it just doesn’t work for him to be the gorgeous embodiment of perfection benevolently watching over society. Nic Cage should not benevolently look over a plate of chicken wings because he definitely does not come across as comforting or caring in his appearance.

No offense to the guy. He is a great actor. But this part was not made for him and he was destined to fail from the beginning.

This movie isn’t good. Maybe you can get some enjoyment out of it in the idea of a “so bad it is good” type of movie. But beyond that, it is just a shallow remake that was trying to cash in on the Meg Ryan success at the time.