Man, it has been a while since I typed anything out. Considering, I have been putting the work in when it  comes to the video format, I have lost track of time as far as posting written content is concerned. But at either rate, it is time to take to the typing again and write about a particularly favorite board game of mine, Dead of Winter. The game by Plaid Hat Games is one of the most fun and immersive zombie apocalypse stories out there. While it is a little light on the fluff material, the characters and setting are enough to craft an imaginative story in anyone’s head. One of which includes some of the best characters you will find in a game. Based off of a few known celebrities as far as appearance is concerned and with some fun tongue in cheek attitude, each one comes with their own abilities and attributes that can help win the game for the group. As with any game, some characters are great… And others are kind of terrible. So with the fact that the next expansion comes out next month, it is high time to count them down. This is the three worst character and best characters in Dead of Winter.

The only thing really going for Gray Beard is the fact that he is a pirate and people like pirates. Why there is one in what could best be construed as Montana or Wyoming? WHO THE FUCK CARES! PIRATES!!! But seriously… Gray Beard is terrible. Not only is he worthless if you play co-op, but he isn’t that great if you use the traditional secret objectives either. He can steal shit at random, which isn’t as good as just picking something out that you want. He has EXTREMELY low influence meaning he will be the first to go in a bite incident. His attack is good but his search isn’t great. In other words, he is kind of terrible.

What more is there to say? Of course Forest Plum sucks… But I think that is the joke. It seems like, no matter what card involves him, it is a big joke about how Mall Santa Plum is an alcoholic waste of space who is only good for one thing and that is to get rid of him to slightly boost group morale.

While the joke is funny, it doesn’t necessarily make him a good character for the game.

With the release of the second Dead of Winter expansion, the purpose of Brian Lee became completely pointless. Labeled the Mayor, Brian’s purpose was two-fold. First, he was the character with the highest influence. Meaning, that he would die last and could make a player go first if he was their team leader. That was nicked when he was replaced with a slew of different characters in the latest expansion and continues to fall down the list with the up and coming expansion. His second ability, the ability to raise one unused action die is an ability that anyone can use as long as they spend a food. Combined with average search and attack stats, this renders him relatively pointless.

Guns are some of the best items in the game. They are able to murder zombies without dealing with side effects and often have little down sides to them. Some gun abilities are the same abilities for other characters. Such as Kevin Jackson, whose in game effect is the same as a sniper rifle. Another one is characters who can kill a zombie without exposure, which is the same as a pistol. With Alonso Ortega, you can have almost any gun in the game making him instantly better than most characters with weapon abilities. For the price of two food you have access to just about any gun that you want, outfitting your entire colony.

Let’s face it, food is one of the most important items in the game that will drive you insane to try to stockpile. Especially as characters continue to stock pile as well. Loretta’s ability insures that is not a problem. For the price of a four or higher, Loretta can add two food to the stockpile, instantly feeding four people or adding much needed die score increases. Which are also important with the Raxxon addition. Her ability does mean she stays at the colony. But overall, that stationary nature is all that is needed. 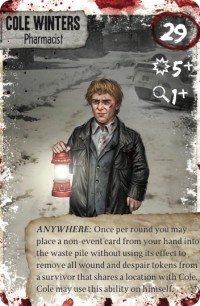 Before The Long Night expansion, Olivia Brown would take this list. You need to be able to hear characters. She was indispensable. With the addition of Gia Naajar, Derek Yoshida, and Cole Winters, Olivia had competition. Considering the fact that most of them have similar abilities, it was a tight case. But a new competitor took her place. Since, as long as you have a card ANY card in your hand, Cole Winters is the best character in the game. Unlike Olivia who is able to remove one each turn, Cole can clear entire characters with the elimination of one card. While it can be argued that the two cancel out, it seems that Cole’s ability slightly outweighs the build up over time.