So, as you all are sure aware, I am a huge fan of Transformers. The G1 series is intricate to my childhood and I still am nostalgic for it to this day.  While I do love it, I do admit that just about everything that was released of Transformers after the fact… Kind of sucks. Beast Wars was solid until it went back to Cybertron. But beyond the the best I can come up with is Transformers: Prime which is… Okay… Just okay. And don’t even get me started on the fucking Michael Bay movies… Well… Almost everything. There is one other show that I do love from the Transformers line that came up after the fact and that show is Transformers: Animated.

Yet strangely enough this is a series that is not looked upon fondly for some reason. Often considered to be too “kid friendly” and a little silly, Transformers: Animated doesn’t typically get brought up when you talk about the greatness of Transformers… Which is a shame considering the show is fucking solid! So today we are going to open up the vault to make a case for Transformers: Animated being an underrated gem. END_OF_DOCUMENT_TOKEN_TO_BE_REPLACED 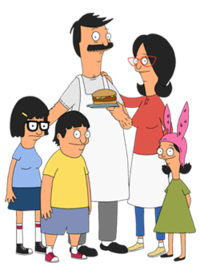 Whenever it was first released, I had no interest in watching Bob’s Burgers. This show came out during the height of the Middle Class America Adult Cartoon craze that Family Guy (and by further extension The Simpsons) started. I watched shows like this at best for background music when there was nothing else on and that was the extent of it. When shows like American Dad, The Cleveland Show, and Bob’s Burgers reared their heads… My interest was well below zero. It wasn’t until my roommate turned on Bob’s Burgers earlier this week that I ever got a taste of the show and after sitting through the majority of the episodes… I have to say that I was pleasantly surprised… But not necessarily blown away. Bob’s Burgers as I predicted, has several similarities to shows like Family Guy. A middle class family with several kids each with their own quirks and goofiness trying to get by day-to-day and we get to sit and watch all their crazy wacky antics… But still I cannot deny that this show does have an identity to it that is all its own, a uniqueness that separates itself from Fox Network’s cavalcade of cartoon shows. END_OF_DOCUMENT_TOKEN_TO_BE_REPLACED