Here it is! Finally, after making it halfway through January, it is time to deal with the epitome of suck; The WORST Movies of 2016. All things considered, this year was rather good to me. I certainly saw more good movies than bad movies or at least movies that fell into the passable category. Though I do have to admit that when it comes to the bad movies, they were pretty fucking bad. This list was one of the worst trips down memory lane I have taken. From pretentious art movies to shallow sequels. From terrible YA adaptations to horrific Christian propaganda, this list is going to sum up the worst aspects of 2016 rather well.

I do have to add one more time that this list includes only movies I have personally reviewed. I am sad to say that movies like Hillary’s America and Vaxxed will not be on this list because I did not see them. Though I can safely tell you, from reading the synopsis, and seeing critic reviews that they would almost certainly have taken the 1 and 2 spot if I had seen them. With that said, we will start with one dishonorable mention and then move on to number five! END_OF_DOCUMENT_TOKEN_TO_BE_REPLACED 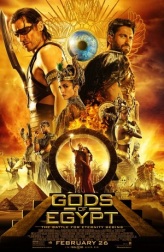 This movie is a piece of shit! I already have a strong contender for worst movie of 2016. The movie gods have smiled upon me once again. My god… You know, this really is the worst kind of movie. It is the kind of movie that you can see where the idea was going and in the hands of more capable people, could have been something good. But instead the money is absolutely wasted on a terribly written story, a mix of what could have been good graphics, and just all around shitty camera work makes this film an absolute pile of garbage of awfulness.
The plot of this movie, I think, it was painfully difficult to follow it… BUT the plot that I can glean is that the Gods of Egypt live with the mortals. They are very tall (when the camera work let’s them be), they bleed gold to get that PG-13 rating, they have terrible CGI morphing powers, and are nothing more than condescending dicks to them. Osiris (Bryan Brown) is kind of cool with mortals, but everyone else belittles them and expects there worship… Which the mortals are more than happy to do! Except for our plucky protagonist Bek (Benton Thwaites) who is an atheist, much to the chagrin of the love of his life, Zaya (Courtney Eaton). One day, when Osiris is crowning a new king in Horus (Nikolaj Coster-Waldu). All is going well until Set (Gerard Butler) gets a wild hair up his ass that he wants to rule Egypt. So he kills Osiris and rips out Horus’s eyes. He then dictates that in order to get into the afterlife, you need to pay your way in… Why? Who the fuck knows? Who the fuck cares, this movie sure as shit doesn’t.

A year passes Horus is a sham of his former self. After Bek robs one of his eyes from Set’s vault, Zaya is killed by the master builder. So Bek and Horus make a pact that if Bek helps Horus get his other eye back and he will bring Zaya back to life. The rest of the movie is a pile of who the fuck knows including battles that would be cool if we paid any amount of attention to it, Horus’s shotty relationship Hathor (Elodie Young), and Ra (Geoffrey Rush) battling a gigantic cloud worm. END_OF_DOCUMENT_TOKEN_TO_BE_REPLACED