So, considering the fact that I have finally decided to write the 100 Greatest Movies of All Time… Which is coming soon… I decided to revisit one of my favorite posts of all time: My Favorite Movies of All Time. Here is the thing, opinions change, ideas change, and ultimately my tastes have changed. Some movies have become more prevelent in my mind. Some… Some have fallen off the board altogether. When I originally created my Top 25 list… I completely snubbed a few of my favorite movies due to good ole fashion forgetfulness. As such, movies like Die Hard and Reservoir Dogs have made and rectified the list. So with that said, please enjoy my Top 25 FAVORITE MOVIES OF ALL TIME! 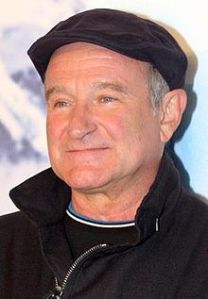 On August 11th, 2014 Robin Williams was found dead of an apparent suicide. Typically when a celebrity passes, it is a tragic occasion and I personally feel some sorrow, but typically I just shrug and say ‘Well that is a shame’ but it isn’t the end of the world. After all, I didn’t know them personally, so no skin off my nose, right? But this is one that hit me and hit me hard. Of all the performers and actors out there, Robin Williams was my childhood. From his role as the Genie in Aladdin to Mrs. Doubtfire and to his hilarious stand up routines, a lot of my humor can be attributed to Williams and his acting. Upon hearing that Williams passed, I was devastated. Such a large part of my childhood gone just like that.  It is a shame and it is a shame of the reasons why and the events that transpired. But with that being said I wish to commemorate Mr. Williams and everything that he has done for me and my life that he had a hand in shaping with his art. So in honor of Robin Williams and his memory this is my Top 5 Greatest Robin Williams Movies of All Time.

This list is my personal opinion based on the quality of the movie and the impact that it had on the viewing population and the career of Mr. Williams. If you disagree with it, I am always welcoming of a friendly debate. This list is also meant to commemorate his movie roles, not his television roles so you will not find Mork and Mindy on this list. With that being said let’s start with some honorable mentions. END_OF_DOCUMENT_TOKEN_TO_BE_REPLACED