After my recent post about the soon release of Changeling the Dreaming’s 20 year anniversary, I thought to myself, “Self, why not write a post about all of the Classic World of Darkness games?” So that is what I set out to do. The great thing about the World of Darkness franchise is twofold: First, the game is set in modern time. You, as the storyteller and players, can build an entire game around your surroundings or even make a character based on yourself. Unlike fantasy games, it is easier to get lost in a world that you already live in, just with the addition of meta-humans like hunters, werewolves, vampires, and so forth. Second, is the diversity. If stalking in the night like a vampire isn’t your thing, then you can play as a vengeance seeking hunter who wants to rid the world of all the evil monsters. Maybe the dark and dreary world is too much for you, well why not go for Changeling? It is beautiful and much more lighthearted. Maybe you feel more connected with nature, then Werewolf is for you. Maybe you feel that Dungeons and Dragons wizards and sorcerers are too constrained by a spell list, well then play Mage where your powers are only limited by your imagination. Variety is certainly the spice of life and World of Darkness flaunts that as one of its best assets.

However… Not everyone of the games was solid. Tragically there were a few in the set that just didn’t work well and will be lost to the sands of time. So this list is to commemorate all of the games for their successes and their failings. This is every game of Classic World of Darkness ranked from worst to best. NOW! I do want to clarify that this list DOES NOT INCLUDE New World of Darkness. I’m not a fan of New World of Darkness and have stayed away from the game that I have seen to be a more muddled version of its far superior predecessors. So with that said, I will only include those that are officially recognized as apart of the “Classic World of Darkness” Set. END_OF_DOCUMENT_TOKEN_TO_BE_REPLACED

On the latest episode of V107 Roanoke by Night, AM/FM500 informs the city of Roanoke that tensions are brewing between the Camarilla, Anarchs, and Garou. There is also potential mage activity that has caused significant damage to Grandin Village.

On this episode of NTSOE I am joined by Chey, Erik, and Caitlin as the three of us talk about the pen and paper RPG World of Darkness, some of our favorite games, characters, LARPing, and more all around goofy nerdy things. 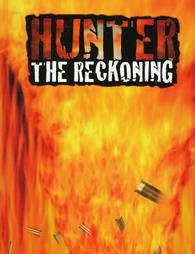 You know there are two things that I love in this world. The first of which is gaming of any sort and the other is writing. I’ve been playing games since playing Super Mario Brothers as a damn near toddler on my Grandfathers NES and Super Nintendo and have been writing stories and attempting to get a novel published since my freshman year of high school.

Gaming and writing are pretty much my bread and butter and are intricate parts of my life and my personality as a whole. So needless to say anytime that I play an RPG like Dungeons and Dragons, Shadowrun, World of Darkness, Dark Heresy, Call of Cthulhu and so forth I can actually see a written story unfolding before me only I do not have complete control over how the story is going to go. I absolutely love it and can even form the fiction in my head as we are playing. This probably being the reason why I tend to gravitate more towards the GM/DM role then the player role.

But for a while I have been wanting to create some new series that involved both of these subjects and now that new series is here. Gaming Tales will be my fictionalization of actual RPGs that I played in the past whether it be GM or player. I will emphasize that these are fictionalizations of these games, not stories of the games themselves and I hope you enjoy them.

That being said I was thinking of a story that would be a good starting point to this new series. While I would love to create some stories about D&D I feel those need to be saved for now as they are large epic lasting tales of yesterday. Instead I want to delve into the a story from the World of Darkness.

So in a nutshell, the protagonists of the story take on the role as humans who have been given powers by an unknown force called the Messengers in order to combat the vampires, zombies, werewolves, and so forth of the world that is dragging it into the depths of hell.

This particular one is one of my favorite stories and one of the most recent that I played with a few associates of mine here in Roanoke. So without further ado I hope you enjoy.