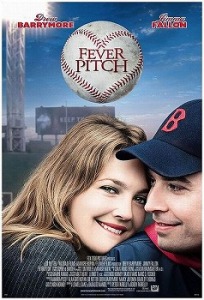 Oh my… This was absolutely terrible. Why didn’t I watch this movie for Cheesy Romance Month? It takes me great pains to say this… But I have actually found a movie that makes me want to watch Just Go With It again. Damn! I feel dirty saying that! This movie makes me WANT to sit through an Adam Sandler movie! That is how bad it is! At least with that movie I knew what I was about to watch was going to be terrible and at least the humor did not offend me at every turn with highly questionable morals, terrible stereotypes, and is a bastardized American version of what was originally a Football (Soccer if you must) story!

Fever Pitch is the story of Ben Wrightman (Jimmy Fallon) and Lindsey Meeks (Drew Barrymore). Ben is a 30-year-old man-child who has an obsession with the Boston Red Sox. He owns season tickets to the Sox and has been going since he was a 7-year-old boy. He meets Lindsey, a workaholic who is obsessed with her job. The two begin to date. Throughout their courtship, Lindsey and Ben’s relationship blossoms and is later put on strain by Ben’s obsession with the Boston Red Sox as it consumes every part of his life. I wish I could explain more of this movie, but in all seriousness that is about it. It is an extraordinarily padded film based around a very simple concept, two people fall in love, the Boston Red Sox are involved, it strains their relationship. That is about it. END_OF_DOCUMENT_TOKEN_TO_BE_REPLACED